Book and review 3,608 holiday parks and campsites in the UK, Europe and the Americas

To raptor-ous applause - the big Pitchup.com guide to falconry and UK birds of prey

Pitchup.com has been accosting birds of prey.

Well, only one of us, eggsxactly - this very writer, who recently spent five days in Cambridgeshire on the LANTRA beginner falconry course. (Owl be honest, the falconer's knot nearly finished me. And on the first day I wanted it made ill-eagle.)

And so. Partly to impart this newly acquired and hard-won knowledge, and partly because the idea of falconry and birds of prey elicits avid cheeps of interest in most, we bring you the big Pitchup.com guide to falconry and UK birds of prey. It's a hoot.

(For a non-raptor look at British birdwatching, see our Bird's eye view blog.)

We're talon you: the birds of prey lowdown

The first thing we must tal, sorry, tell, you is that the term to use is 'raptors' (derived from the Latin rapere, meaning to seize or take by force, and also from those scary creatures in Jurassic Park).

Raptors are birds that hunt other animals (and, zombielike, often tuck into carrion too) by the use of excellent eyesight and flying speeds to find/land on prey; strong beaks to tear flesh and powerful talons for holding – or killing – a catch.

Still with us? Then we'll fly on... within the raptor group are two main families: falcons and hawks, or accipitridae. Falcons are raptors that mainly kill with their beaks, while the accipitridae family (hawks, eagles, kites and some vultures) use their talons, much like the average pubgoer on a Friday night tackling a kebab. 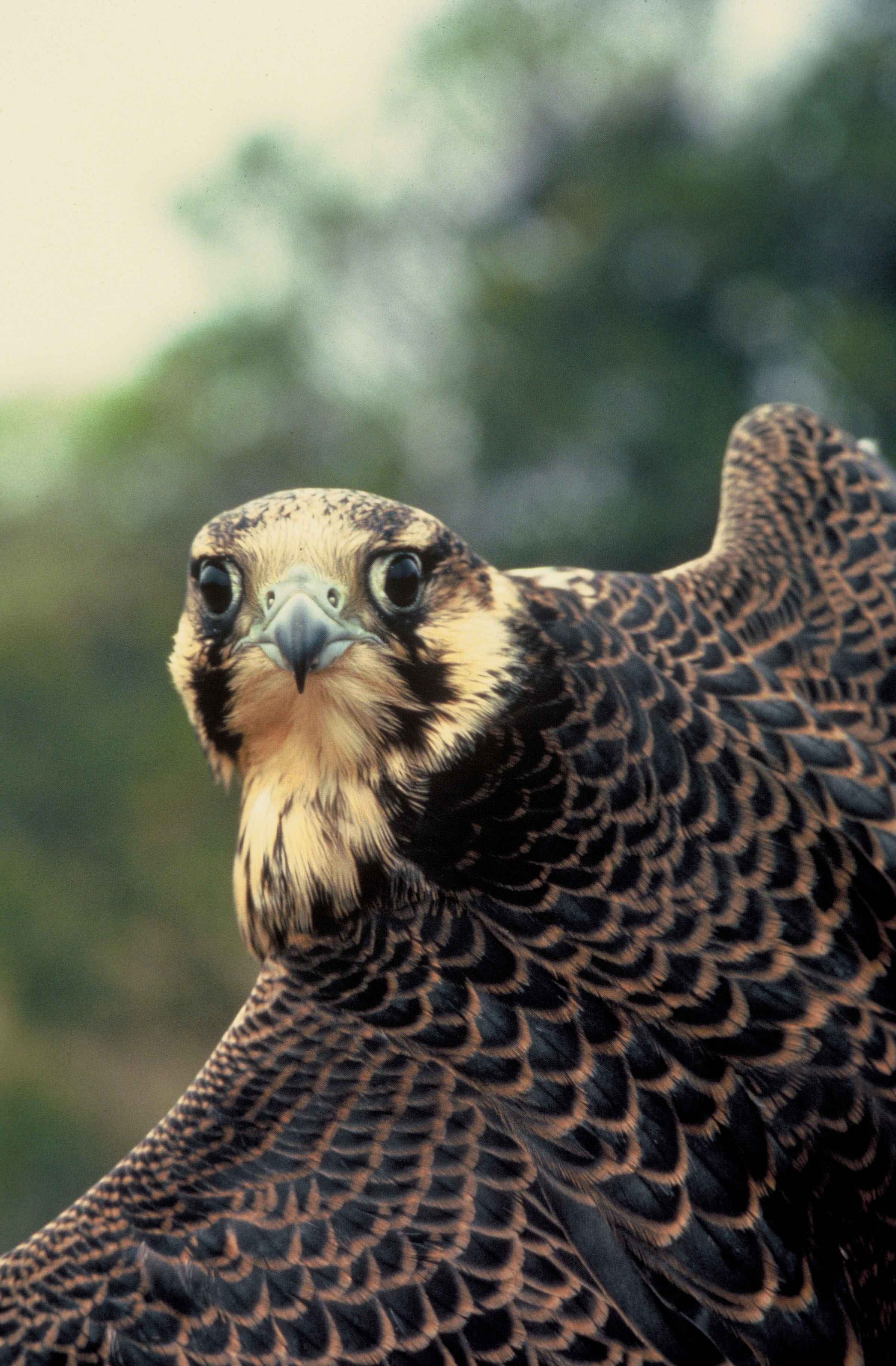 Owls are obviously birds of prey, but don't fit easily into the falcon/hawk/raptor category: one school of thought says they're are indeed raptors, but of a nocturnal variety, while another categorises them as indeed raptors again, but of a different class than falcons or hawks. And a few feathery fora say they're not raptors at all... Answers on a postcard please.

When you're prowling around the country looking for British birds of prey, you'll be looking out for kestrels, peregrines, merlins and hobbies in the falcon family, and buzzards, sparrowhawks, goshawks, eagles, harriers and kites among the hawks. Don't get them mixed up, or you'll look falcon stupid. Which could be hawkward.

Pounce on the RSPB's guides to falcons and allies and hawks and eagles to sound knowledgeable in the field, and use the diagram below right to confidently state things like, 'Oh yes, that's certainly a harrier and not a buzzard' when trying to identify birds way way above.

Where to see birds of prey in the wild

We can keenly report there's no need to be particularly eagle-eyed when it comes to spying raptors in the skies: locating a bird of prey nature reserve in the UK is a cinch. Stick your beak into these ten Wildlife Trust reserves to kick things off:

With a name like Snape Marshes, you'd think that snowy owls named Hedwig might be among the feathery inhabitants, but no. However, you'll see barn owls and short-eared owls among the reptiles and butterflies at this new Alde Estuary reserve, which also breeds barn owls in owl boxes on site.

Hickling Broad is the biggest body of water in the Broads: go here to see barn owls, kestrels, sparrowhawks and a hundred or so marsh harriers nesting in its Stubb Mill in winter.

We've mentioned Lincolnshire's Gibraltar Point before. Just south of Skegness, it's one of our most topping places in the land to spy gulls, terns, waders and wintering wildfowl... but we must also give it raptor-ous applause for its bird of prey possibilities.

The biggest reserve of the Scottish Wildlife Trust is one where golden eagles soar. You might also see merlins; take the Postman's Path along the coast for the best opps of spotting both.

No need to bogart bird of prey sightings at this Grange-over-Sands site overlooking Morecambe Bay, as it has enough peregrine falcons breeding in its limestone cliffs to provide photos for all. Peregrine numbers dropped dramatically during the twentieth century due to pesticide use, so go and show some love.

We've mentioned the wildlife of Dawlish Warren a few times before too. The 500-acre nature reserve on the mouth of the Exe Estuary is also a Site of Special Scientific Interest and is a haven for birdwatching, particularly for wildfowl and wading birds.

Occasionally picking off from the flocks of thousands are the reserve's peregrine falcons, swooping down at speeds of up to 232mph. A smartphone camera will probably not suffice.

A woodland nature reserve near Wadebridge with many species of woodland birds among its pipistrelle bats, badgers and foxes. Tawny owls breed here and so we rather fancy an owl-spotting expedition in the dead of night.

One of the best birdwatching sites in all the country. People usually come here for the puffins and other seabirds, but such tasty numbers mean that birds of prey flock here too: look out for kestrels, peregrines, sparrowhawks, buzzards and short-eared owls.

The ubiqitous peregrine can be seen again here (well, it's Britain's most common bird of prey and the world's most widespread raptor), as well as kestrels, sparrowhawks, marsh harriers, hen harriers, merlins, an occasional buzzard and owls of the barn, little and tawny persuasion.

Falconry experience days do just what they say on the feathery tin, and let falconry fans handle and fly birds as well as learn about keeping a bird of prey. (We'd like to knowledgeablely point out that they should be called 'raptor experience days' as they usually feature both hawks and falcons. And sometimes owls.)

If you're lucky, you might even get to feed a bird on the fist. And trust us, nothing says 'I'm actually quite keen on this falconry lark,' than having a hawk pull apart a dead chick a couple of inches from your precious precious face.

A teeny sample of falconry experience days in the UK:

Dorset-based company with experience days in Dorset, Kent and Surrey.

Displays and experience days near Hexham.

If you just want to see the mighty beasts do their thang rather than having one land on your fist, falconry displays are all over the country these days and in practically every county.

As a start, try the likes of Leeds Castle and Warwick Castle; local countryside shows; farm parks and wildlife centres: enter the postcode of any falconry display centre into our homepage search box to find places to nest nearby.

You should see the standard suspects in the raptor families as well as some non-native species, like this spectacular shot of an American bald eagle taken at the Raptor Foundation in Cambridgeshire.

Where to do the LANTRA Beginning Falconry award

And of course, you might fancy learning the ancient art of falconry rather than merely seeing or flying a raptor for a bit... and you might fancy eventually keeping your own bird.

Hatch a fledgling interest in falconry and learn how to master the falconer's knot (cries) with a five-day LANTRA Beginning Falconry award, designed to do just that.

(And. One thing we must point out before you consider forking out bills for a course is that falconry is a right-handed art. This is because the world, apart from in emporiums set up by one N Flanders, is geared towards the right-handed [bah]. And also so that falconers on horseback, keeping a bird on their left fist, could use their swords with their right. And so, this insistence on right-handedness could possilbly prove an issue for southpaws, who might, quite reasonably, prefer to know this fact beforehand. Not that we weepingly know this from personal experience [cries again].

A few LANTRA award providers are below; gauge some general information on it here from the British Falconers Club: 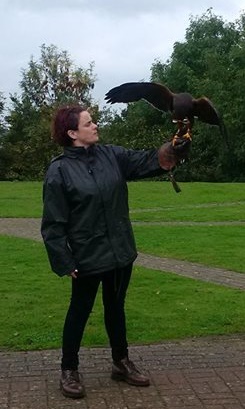 International Centre for Birds of Prey

Birds of prey in Scotland

Falconry around the world

By country from the Falconry Heritage Trust (a prize catch, prepare to spend hours)...