Book and review 3,608 holiday parks and campsites in the UK, Europe and the Americas

Well no. No, it isn't. And we do apologise for mentioning the C-word so early. But we must admit we have been pondering on presents this week (presents to be given to us, natch, not presents we give others. The very idea.)

We have also been plundering the archives, chuckling once more at camping gizmos like PicNic pants and poo boxes (to see of what we speak, click here.)

And so, it's time for the camping gimmicks and gadgets 2015 Pitchup roundup, whereby we gather up our latest favourite outdoorsy acquisitions. Ready your Christmas list:

We might admit to having already bought one of these. (And to thinking they might make a nifty festive gift – bah to our inherent good natures).

And a bottle opener – because face it, however much like one B. Grylls you might want to be, this is the tool that will be used the most. (Cheers.)

We're quite in love with this, a teeny tiny portable barbecue grill weighing just 8lb, that fits in a backpack and folds up like a camping chair.

And it only takes 20 seconds to set up – just time for your camping companion to open the brews with a Leatherman or a Pico (see below).

Roll it up, pack it and stride (wo)manfully off into the wilderness with it over your shoulder; this might actually make you feel like an actual B. Grylls.

On pre-order from GoBQ Grill; around £96.

Fan of onesies? Ever wished you could stay under the duvet of a morning while you brew the essential cuppa? And don't these look fetching? (That's one in the main pic.)

Bag separate top and bottoms made of duvet material, or a onesie Pouch Suit made of sleeping bag material to keep you toasty around the campsite – we're eyeing them up for around the house (or on the train; we care not) this winter too. Pub smoking gardens seem rather more inviting now as well...

From £49.99, via Lazypatch; buy a duvet suit in the UK here or a sleeping bag Pouch Suit here.

And reflective guy lines, and a pack with lanterns and torches, aluminium and LED tent pegs, a repair kit and a canopy pole set. Take that, tent we tried to put up in the rain in 2012. Bah.

Another gizmo so current it's not even on the market yet – that's just how we up-to-datedly roll.

The Pico bills itself as 'the smallest bottle opener in the world' – even teenier than the bottle top you're unsuccessfully trying to snap off with a lighter. Ow.

The Pico team has all sorts of bottle-opening goodness on its books, all out very soon: have a look and pre-order here.

We don't really need to say much more here.

Except – this oh-so-enviable gadget cooks a pizza in a piffling five minutes after a ten-minute warm up via its propane tank, and will then heat up a second in five minutes. A SECOND PIZZA. IN FIVE MINUTES.

Pressie the seventh: the Looftlighter

Fire and the means to make it fast must always be included in a camping gimmicks and gadgets roundup.

Our latest fave is the powerful little Looftlighter, a firestarter patented by the Swiss (of course), that requires not match, nor firelighter, nor half a bottle of lighter fuel while weeping of hunger beside a pack of uncooked sausages. It works indoors too. And it too has a bottle opener!

And – mirth – it looks like a hair curler, meaning that ladies who are usually elbowed aside when it comes to Manly! Firemaking! Time! can at least have a giggle at their other halves wielding manfully and frowningly above it. (This, to us, is a win.)

We are not fond of the faff at Pitchup.com. We are laidback types, and would generally rather risk damp bottoms (stop sniggering) than lug around a cumbersome picnic blanket, mainly because we would like more room in our rucksacks for books and beer.

So we like the look of this micro blanket from Matador, which folds up into a size smaller than a bag of crisps (or a matchbox if you go for the solitary version), but which is made of HyperLyte nylon sturdy enough to resist rain, beer spillage or accidentally poking the material with a knife while cutting sarnies/slicing open thumbs on corkscrews.

Pressie the ninth: Zippo 4-in-1 Woodsman

More manliness! Chopping this time rather than fire, and oh how we want one of these. 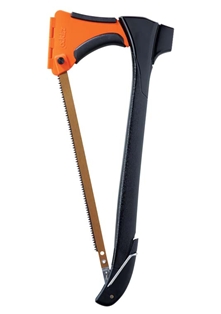 But we reckon the Zippo Woodsman would get more use on most campsites/zombie apocolypse scenarios with its bow saw, mallet, hatchet and stake puller action – and all with a handy/manly 20-inch handle.

'You came, you sawed, you conquered,' say the Zippo folks – yes indeedy.

Do you go camping or to festivals with a bagful of baby wipes? All we can say is that you're very clever if you do and we are not at all traumatised by Those festival toilets two years ago *shudder*.

But! You can take it a larger step further with these enormous body-sized versions, designed to give as full a wash as poss in an area without any water/showers or if you Britishly don't want to strip off under the communal cold water tap.

We think it's probably best not to use these in the middle of a crowded festival. Unless, of course, that's your 'thing'. And who are we to judge. Cough.

So, Santa, are we sorted? We've been brillliant and hardworking and everything this year again. Really.